Enjoy 15% OFF your first order!

By entering your email address , you will receive promotional updates. 15% discount requires a minimum order of $25.

Golf attire is an essential part of the game concept, which is something you rarely see in some other sports. Most golf courses come with a particular dress code the players should stick with. Although these dress codes are not as strict as the rules for PGA Tour or LPGA Tour players, you’re expected to adhere to certain protocols in order to maintain the game’s traditions and the club’s dress code.
Today's golf clothing includes functional garments – collared shirts with short sleeves, a polo shirt, knee-length shorts or trousers, socks, and golf shoes. This article will present the 14 golf clothes for men to play with style, comfort, etiquette, and ease of movement.

Before we jump to the actual examples of golf attire for men, we should explain some basic rules about the dress code.
Men are supposed to wear shirts with collars and sleeves, which must be tucked in. Another part of the apparel is knee-length trousers or shorts, but you can opt for long pants. Socks and golf shoes are also an important detail, and a man should not come without them.

Some of the best shorts and trousers models you can buy at 7Diamonds:

An awesome Sunday fit for a short walk outside or just to lounge! Offering you 25% OFF Sitewide NOW on 7Diamonds.com! #7DLife 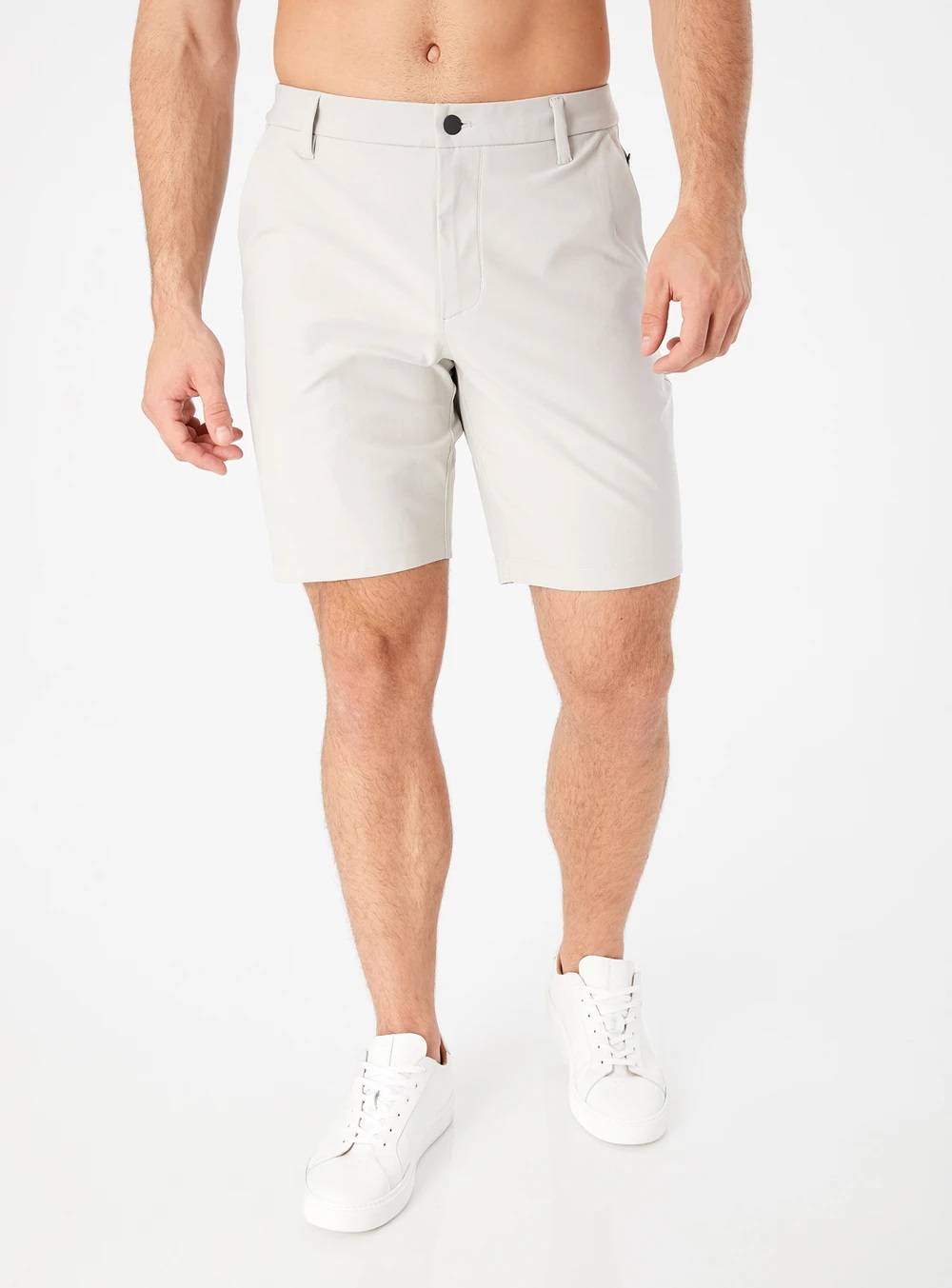 SHOP NOW
INFINITY® 9” Chino Short is an excellent choice to boost your golf attire with a significant dose of comfort and style. It’s an authentic fashion-forward item enriched with our Linear Flex® technology fabric that provides breathability and ease of movement. You’ll love a back pocket hidden zipper, as well as two stylish and functional zippers on the front to hold your valuable belongings while hitting the course.
This pair of shorts will keep you incredibly comfortable and make you look well-groomed and polished.

To golf or to relax? Either way, this works for both! 🏌️‍♀️ Polo: Happier Performance Shorts: Beacon Hybrid #7Diamonds #7DLife

SHOP NOW
Beacon Hybrid Short is a high-quality 4-way stretch piece that allows you to play golf with an elevated dose of style. It's made from quick-dry fabric, which is why it performs exceptionally well in both water and land. It's also lightweight and convenient for playing golf, even on the hottest day. Choose your favorite color and play like a true professional.

Perform any athletic activity with a Venture Hybrid Short, no matter if they involve sea or land. Thanks to its 4-way stretch material, you can take your active lifestyle to the next level – moisture-wicking technology will repel any water or sweat, allowing you to move seamlessly as you play.
SHOP NOW 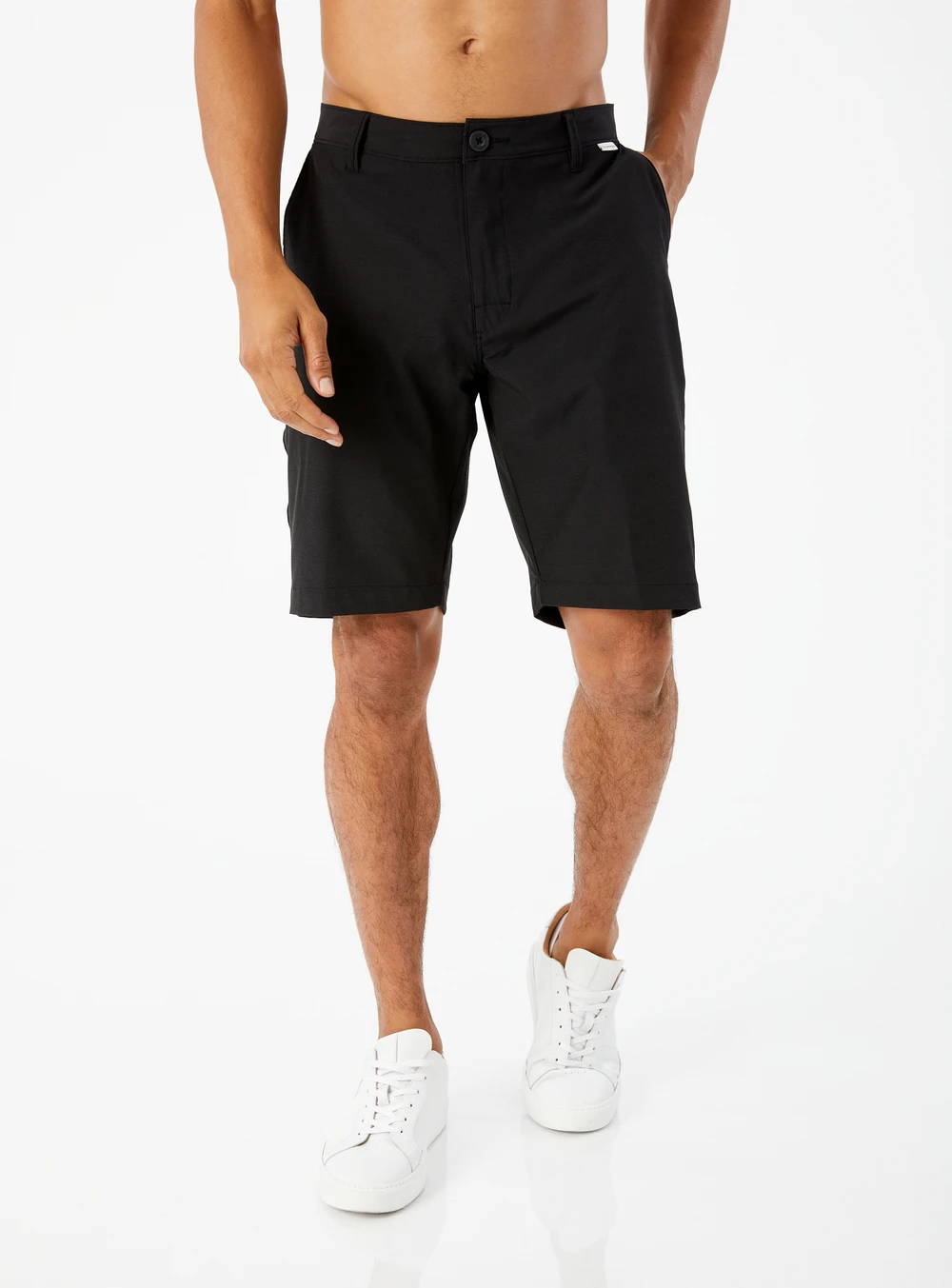 SHOP NOW
Make the golf course atmosphere even more dynamic with a Dynamic Hybrid Short. Specially made for athletic purposes, this pair of shorts features moisture-wicking fabric, 4-way stretch, and water-resistant technology that brings an enhanced dose of comfort to golf players that want to do their best in the game.

SHOP NOW
If you prefer pants to shorts, we suggest you take a look at The Infinity Pant in Ecru. Made from durable, soft, and high-quality material, this pair is perfect for sports such as golf. It provides a great amount of stretch, comfort, and trendiness, making sure you're the most fashionable guy on the course.

The best golf outfits include shirts with a collar, as well as polo shirts, which are more than suitable for sports such as golf. Let's see some of the best models you can buy from our store: 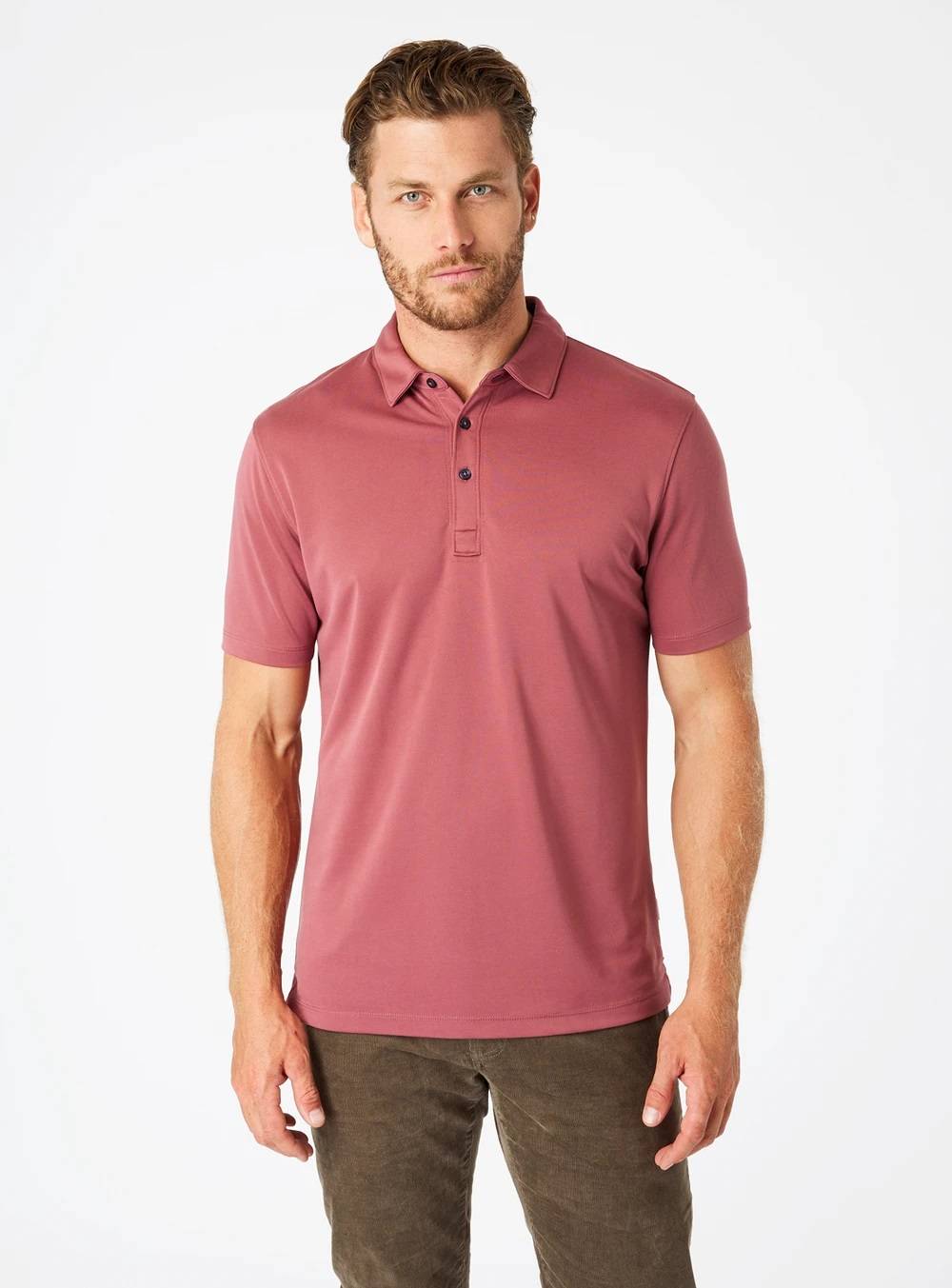 SHOP NOW
Have in mind that our performance polos perform well, no matter if you’re drinking beers in the bar or showing off your skill on the golf course. That said, you won’t go wrong with a Walker Performance Modal Polo, a stylish piece that will keep you comfortable throughout the day. It’s enhanced by moisture-wicking and wrinkle-free technology, which is why it’s suitable for outdoor sports that come with a specific dress code. 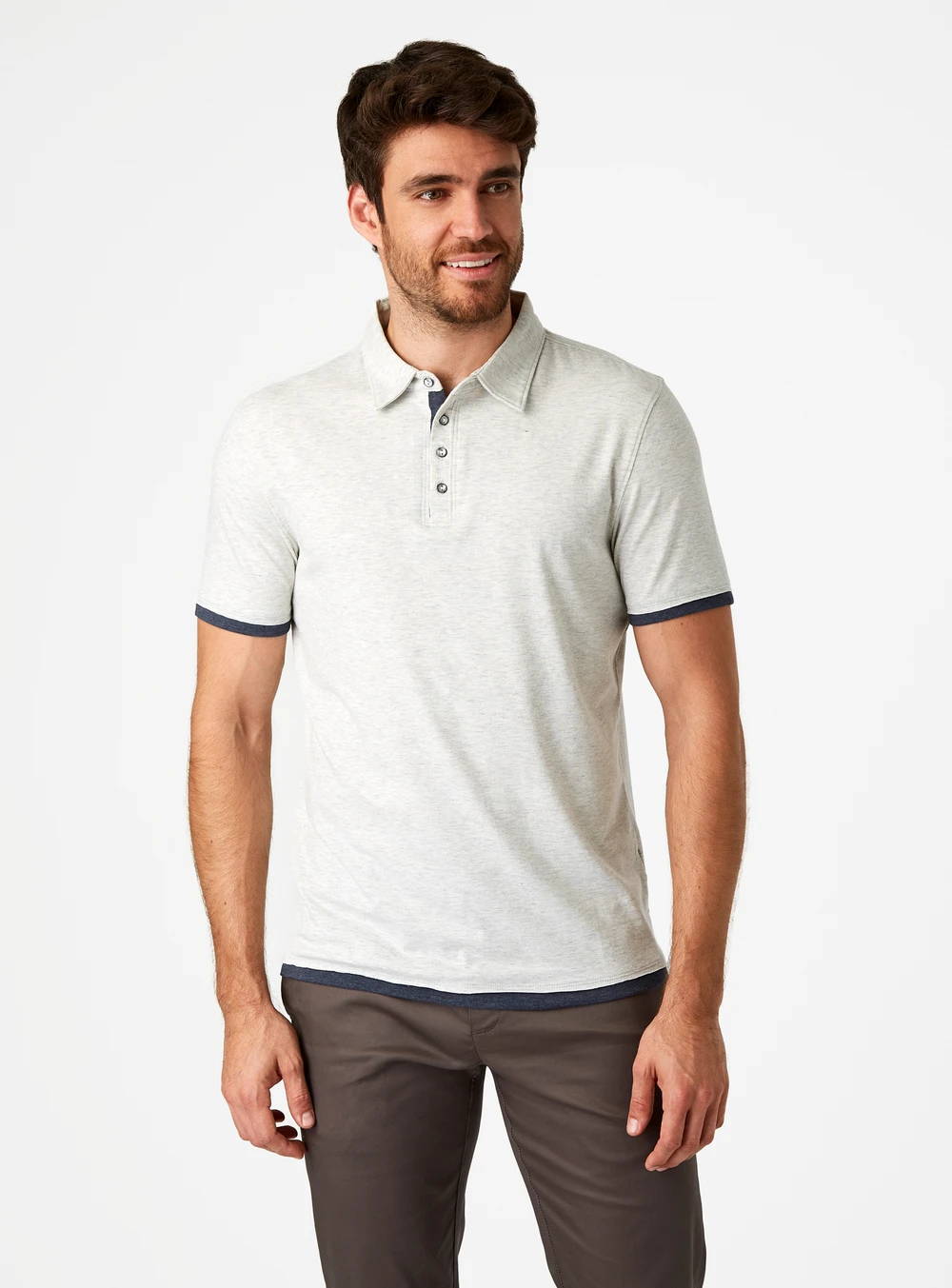 SHOP NOW
The Ultimate Polo is made from exceptional cotton with a slight stretch, making it a suitable choice for everyday wear and golf matches. It's comfortable and incredibly breathable, and small yet practical details deliver a significant contrast that boosts the overall shirt’s style. 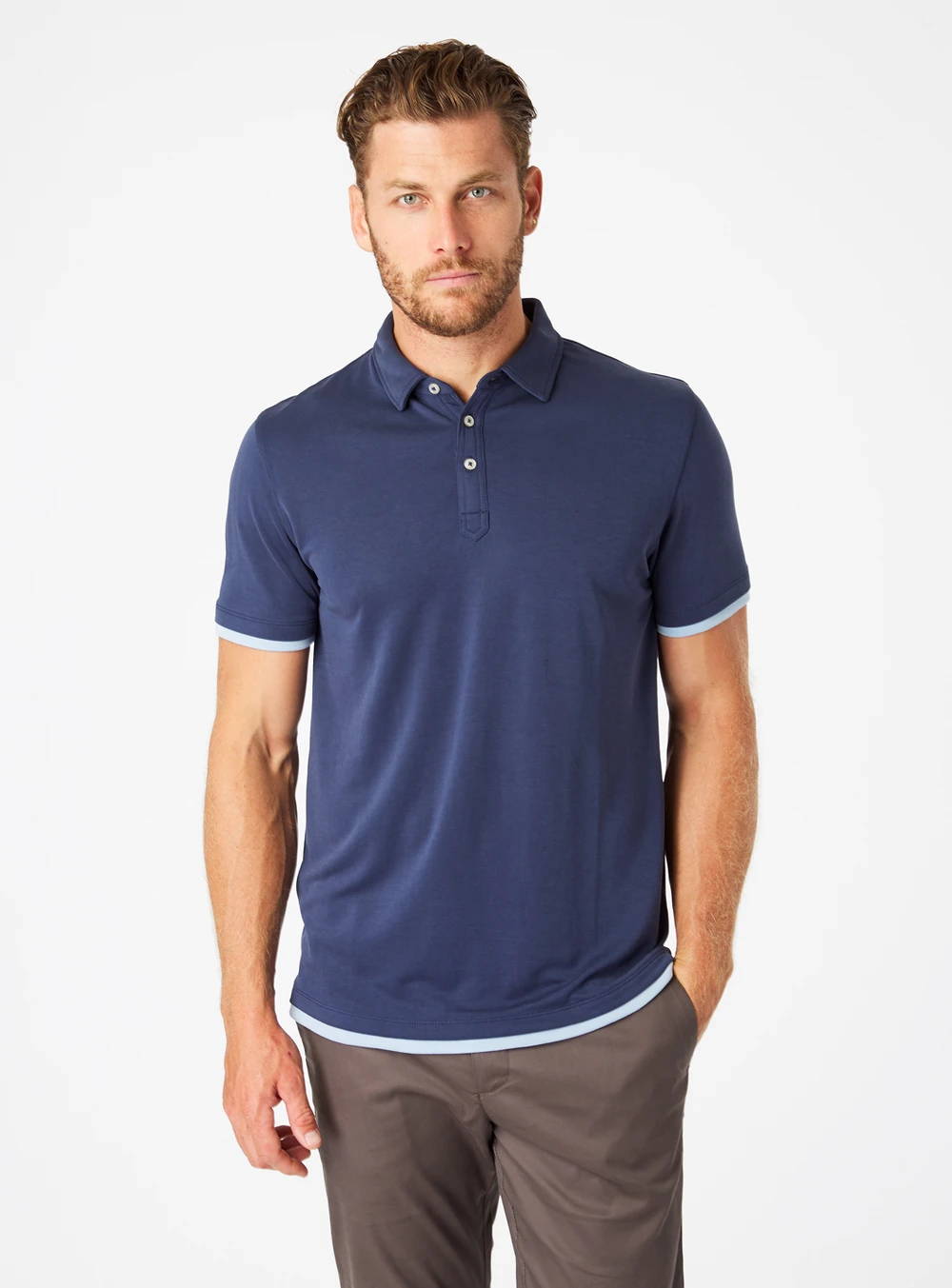 SHOP NOW
Bright colors, high-quality material, impeccable design, and flawless performance are the features of the Foster Performance Modal Polo. Apart from being comfy, this polo shirt is also extremely stylish and versatile. You can wear it throughout the day thanks to its moisture-wicking technology and enjoy your game to the fullest.

Apart from polo shirts, which are a part of the most golf outfits, men should go for long-sleeved or short-sleeved shirts. These have been a critical part of the classic golf attire for men, and they’re quite convenient for different weather conditions – chilly, windy, rainy, or sunny. That said, you can play comfortably regardless of the temperature and precipitation.
Let's take a look at some of the most stylish collared shirt models from the 7Diamonds collection: 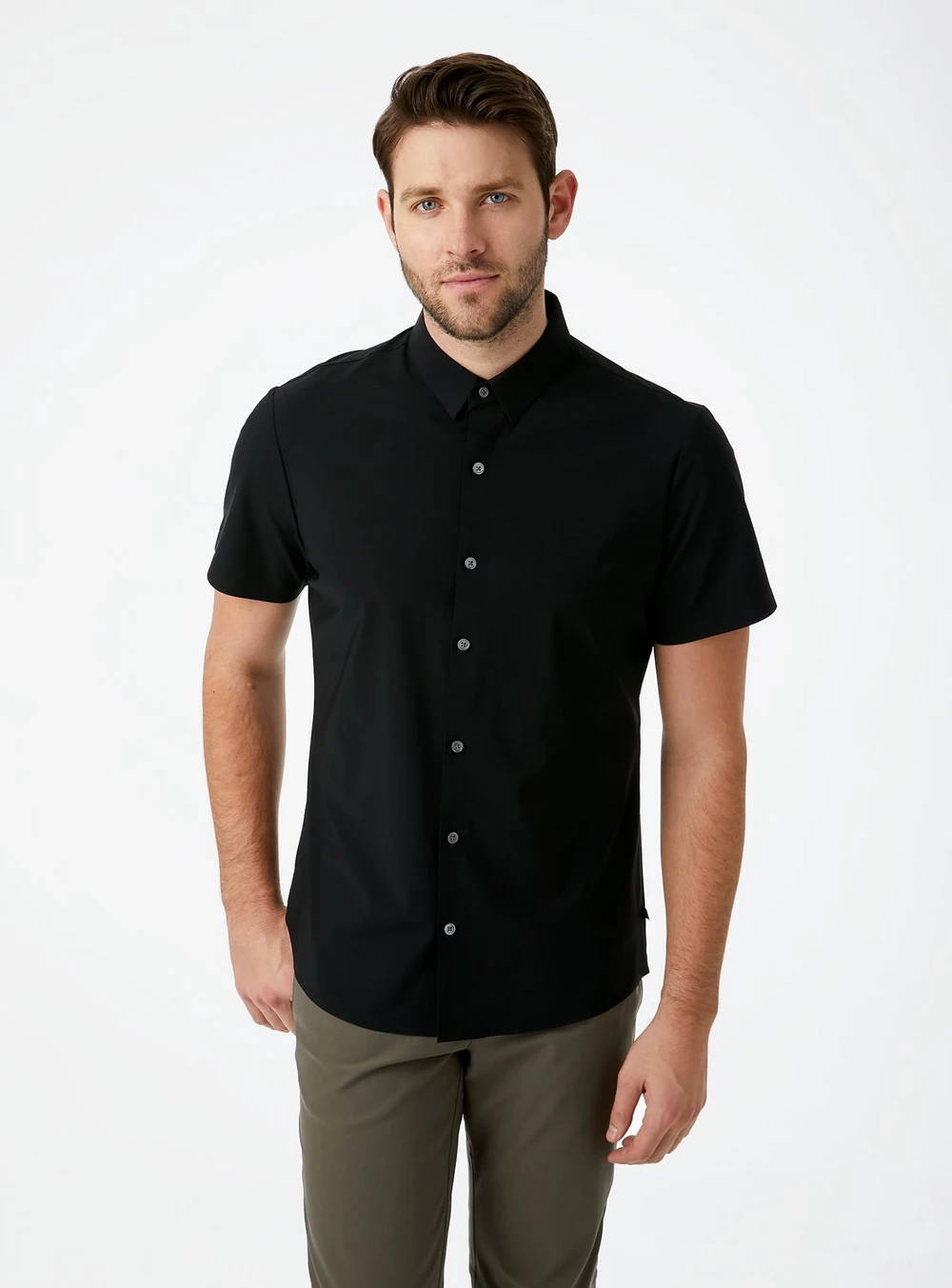 SHOP NOW
American ME 4-Way Stretch Shirt in Black provides you with the best-tailored fit and comfort that allows you to pay your favorite sport while giving your max. It’s wrinkle-free, extra soft, all-way stretch, and exceptionally breathable, which makes it suitable for playing sports such as golf or polo.

This outfit is every man’s best friend 👕 || Tap to shop the Parker Performance Chino’s and Touch of Life Shirt. #7diamonds #7diamondslifestyle

SHOP NOW
Some of the most fashionable golfers outfits start with a Touch of Life Short Sleeve Shirt. Apart from being quite comfy and stylish, this short-sleeve shirt is unique and convenient for different occasions – from casual walks and parties to sports, you enjoy playing.

Go ahead and hit that snooze button. The #7Diamonds Young Americans Shirt requires no ironing! Equipped with our LuxSeam Seamless Technology for a wrinkle-free day, everyday! | #7DLife

Take your golf outfit to the next level with a Young Americans 4-Way Stretch Seamless Shirt and enjoy your match with an elevated dose of comfort and style. Any golfer who wears it will feel enhanced ease of movement, extra softness, and moisture-wicking technology, which is a vital element for all the players. 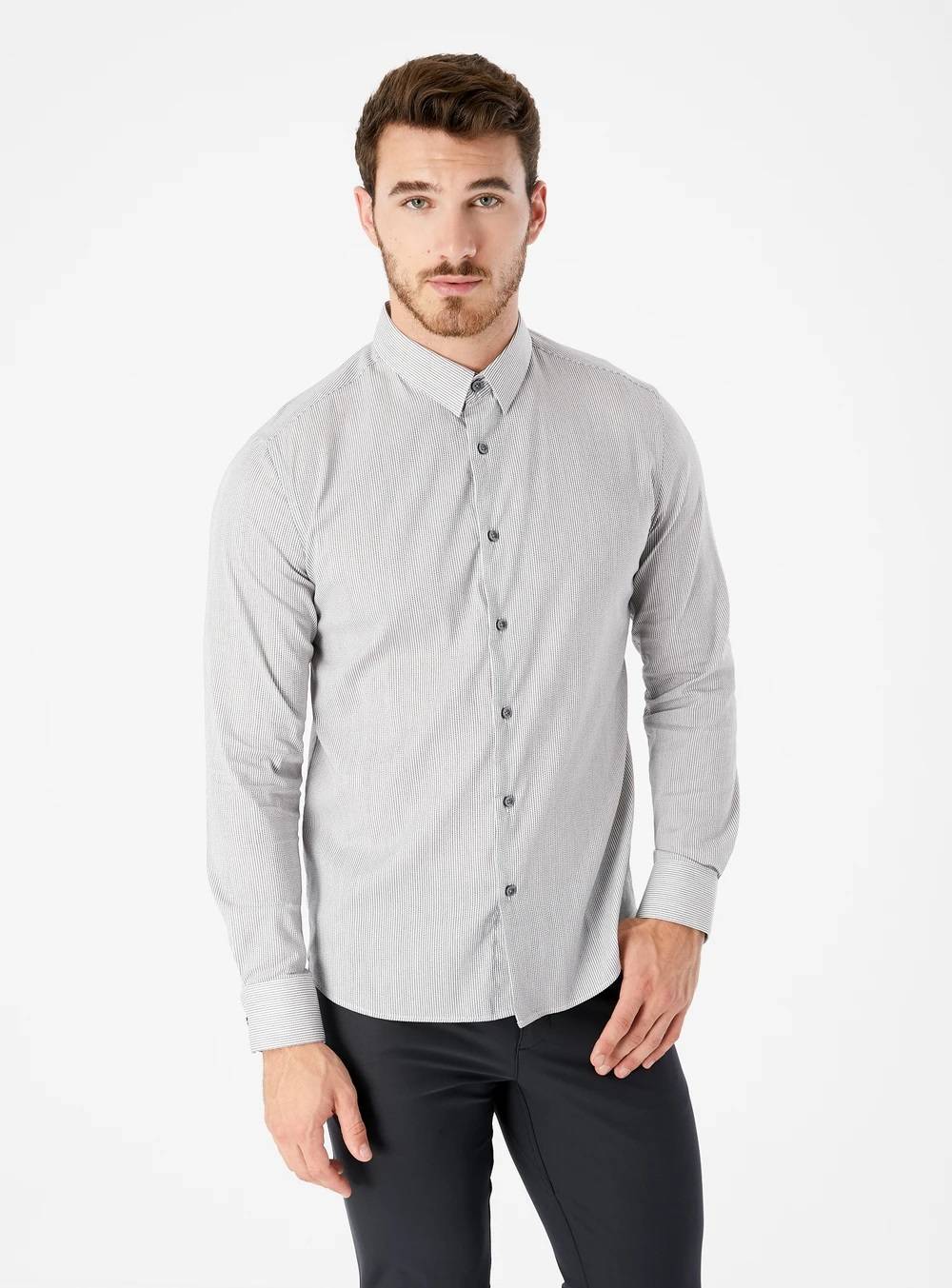 SHOP NOW
A handsome, long-sleeve button-down design and smooth cotton fabric are the exceptional details that make Origins Long Sleeve Shirt one of your top choices when it comes to playing golf. Enhanced by premium cotton and a little bit of stretch, this shirt ensures comfort and ease of movement while playing. Pick your favorite color – gray, midnight, or rose – and grab a golf club with style

Jackets are an important piece you should always have with you if it starts raining or becomes chillier outside. You may also consider wearing a sweater, but it won't be that helpful once it's wet.
Here are the two ultimate examples of the jackets you should take to the course:

SHOP NOW
Made from the materials of the highest quality, The Infinity 4-Way Stretch Jacket is a perfect golf outfit choice for your upcoming game. It provides a pleasant feeling throughout the entire activity, no matter if you're running or playing some sports. Thanks to its moisture-wicking feature, you'll always feel dry, sweat-free, and ready to play effortlessly and with style.

Dress good, Feel good! The Jacket for the All-Around You has arrived! The Commuter Jacket is packed with features like 4-Way Stretch and Wrinkle-Free fabric. And also, made from upcycled bottles and cotton. Shop this must-have jacket on #7Diamonds now! | #7DLife

SHOP NOW
The Commuter 4-Way Stretch Jacket is a true wardrobe staple. It is not only suitable for sports and recreational activities, but it's also excellent for everyday wear when you need an additional dose of comfort. It draws all the moisture away, making sure you feel confident and relaxed as you wear it.
What Else Makes Golf Attire Complete?
Proper golf attire for men is not complete without essential elements that play a significant role in its creation. Let's take a look at the most common accessories that you should add to adhere to most clubs' dress code rules.

A golf umbrella is a vital part of any gentleman’s golf bag. Since the matches are played outside, you don’t want to get wet and lose your motivation to give your best and beat your rival – therefore, you shouldn’t forget a golf umbrella and use it as soon as you notice the first raindrops.

A hat is a must on the course. It protects you from the sun and the UV rays, making sure they are kept out of your eyes during the game. Hats that are typically used for golf are open-weave straw hats and baseball caps. You’ll choose an ideal model based on the weather mostly.

Golf shoes are the most fundamental part of the golf attire since they can significantly improve your game and allow you to move seamlessly on the course. The best pair of golf shoes should be durable, comfortable, and suit your style. They may remind you of the classic saddle shoes, but they are also modeled after trainers and street sneakers.
The most commonly used material for golf shoes is leather. Although it might sound odd, leather is an excellent choice for golf shoes because it’s suitable for all kinds of weather, it’s comfortable, breathable, and it can even be waterproof. 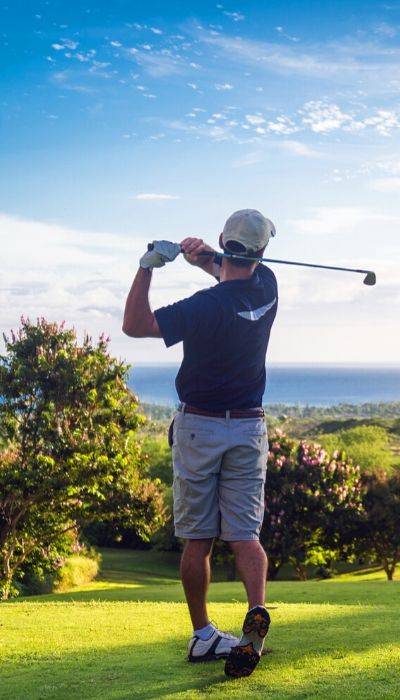 Socks are another fundamental detail that should be a part of your golf attire. The pair designed explicitly for golf features a moisture-wicking technology, which is quite convenient for your feet. Remember that you should never go without socks.
If you’re wearing shorts, make sure that socks aren’t visible.

A Brief History of Golf Attire

Golf has been played since the Middle Ages, and ever since it came to America (the late 1800s), it became an enormously popular sport among gentlemen of all ages. It originates from cold, rainy Scotland, which explains the need for a special attire suitable for such a climate. Namely, the very beginning of golf was associated with tweed suits, high and exposed woolen socks, thick-soled leather shoes, heavy sweaters, knitted vests, and ties.
As the years passed, golf attire started to evolve. During the 20th century, golf popularity expanded to other countries, which impacted the necessity of adapting the outfit to different areas and climates.
Golf attire used today is primarily designed to be functional, which is why you’ll rarely see materials such as wool or tweed. The earthy-toned palette has been replaced with more vivid colors, making the overall look more elegant.
However, golfers are expected to stick with the club's dress code even today. Most golf courses require more formal attire than other sports. As mentioned earlier in the article, you'll probably be asked to wear a collared shirt with short sleeves tucked into knee-length shorts or an adequate pair of trousers, and golf shoes.